Why Is The Black Lives Matter Movement Important? 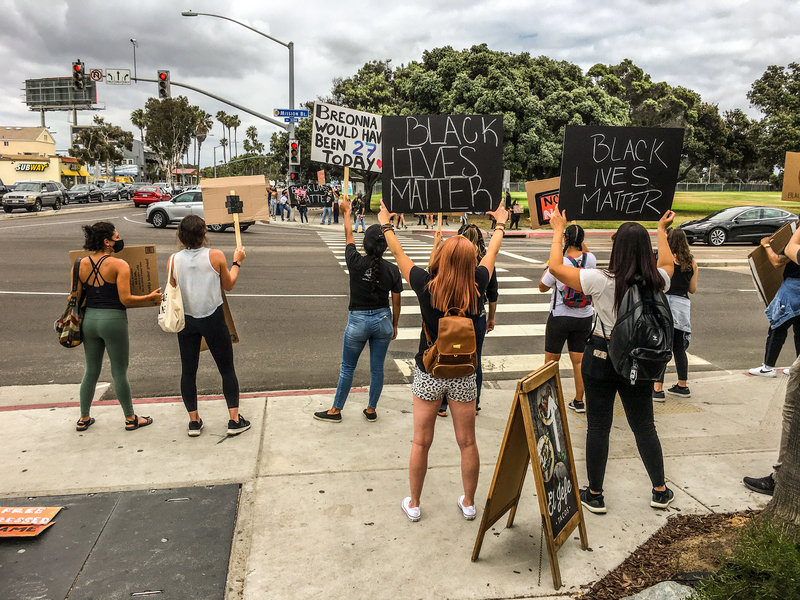 Story By Dave SchwabPublished - 06/10/20Like an erupting volcano, the tragic murder of George Floyd is igniting an outpouring of indignation within San Diego’s Black community, which is demanding reform, social justice, and an end to racial inequality through the Black Lives Matter movement.On June 3, several local African-American spokespeople participated in an hour-long Zoom webinar hosted by RISE San Diego on social justice and accountability in the wake of Floyd’s murder.Black Lives Matter (BLM) is an international human rights movement, originating from within the African-American community, which campaigns against violence and systemic racism toward black people.Most people are familiar with BLM from when NFL quarterback Colin Kaepernick took a knee on the sidelines before a game in 2016 to protest against racial injustice. But the movement actually began earlier, in 2013, with the use of the hashtag #BlackLivesMatter on social media after the acquittal of George Zimmerman in the shooting death of African-American teen Trayvon Martin in February 2012.The movement became nationally recognized for street demonstrations following the 2014 deaths of two African Americans: Michael Brown — resulting in protests and unrest in Ferguson, a city near St. Louis — and Eric Garner in New York City.

San Diego Community Newspaper Group caught up with three of the participants in the RISE webinar – Dr. Roxanne J. Kymaani, Dominic Porter, and Dr. Kristopher Hall – as well as Black student Khadijah Abdulmateen, to get their pulse on Black Lives Matter, and why that should matter to everyone.“There is a significant difference in the way that protests are seen based on the color of your skin, and what you’re fighting for,” said Kymaani, president at Kymaani Catalyst Consulting. “That, in and of itself, is deeply ingrained, and why this fight continues to exist.”“I definitely agree with that,” said Hall, assistant professor for School of Leadership and Education Sciences at the University of San Diego.“Our country originated with the genocide of indigenous Americans and the enslavement of Blacks, and our history is one of bloodshed and violence. We’ve never, as a country, tried to reconcile those things. There is still a lot of work to be done to get everyone on an equal footing.”“This issue is really about the dehumanization and lack of accountability or concern about injustice and violence against Black community members at a disproportionate rate,” said Porter, chief of staff at RISE San Diego, a community-based organization committed to building real urban neighborhoods at the grassroots level. “That injustice and violence is too easily disregarded, and often forgotten, to the point where we become desensitized to the issue.”For Mira Costa Community College student Abdulmateen, BLM is all about proactively addressing racial injustice and inequality.“Youth are joining up to demand to ban the use of rubber bullets used on protesters,” she said. “For me, this movement is about ending violence in my community. Black people have been oppressed in this country for 450 years, and it’s time we see some change being enacted to remove inequality in our society and police brutality on the streets.”Kymaani said the cure for racial injustice and inequality is for people to own up to their “own hidden bias, their own racism, and accept that our society is one of white privilege. What it takes to remove bigotry starts with accountability, starts with acknowledgment and acceptance that this is a problem, and every single person in this country needs to look within themselves and see if they are colluding in the racism.”Concerning police reform, Hall said, “We need to have a real honest conversation about what is the purpose of police, and how we do the preventative work (counseling, social work, intervention, etc.) so that policing isn’t necessary. They (police) exist in communities to keep order, but the order would never need to be kept if we devoted the resources, mental health, education, etc. to solve social problems so policing isn’t as necessary.”Porter said what needs to be done to redress injustice and inequality against Black people is to “remove the psychological conditioning that allows those types of behaviors (police brutality) to go on, and to increase accountability for crimes and violence against the Black community. We need to re-humanize Black people. This is not just a Black community issue. This is a human rights issue.”Abdulmateen said it’s important for society to “support Black folks during this time and listen to their concerns.”Noting she learned about the cycle of racism and violence against Black people from her parents and grandparents Abdulmateen added: “the torch has been passed to our generation and we have to continue this fight until we don’t see folks being killed in the street for the color of their skin. We’re trying to put an end to this. People are just fed up. They’re tired.”